Hi guys, my name is Proto. Some of you may know me from certain chat rooms or my occasional McLeodGaming posts. I’m here to welcome you to the third week of the Super Smash Flash 2 Beta Dev Blogs! This week’s blog will be covering balancing changes that we’ve done to a handful of characters for Beta.

DISCLAIMER: As with anything we show you in these blogs, everything is subject to change.

So, let’s start with Chibi-Robo. Some of you may have spotted this in the Direct, but Chibi-Robo’s up special accelerates to a top speed and now has a strong hit at the end making it a good kill move off the top. But be careful; in Beta, up specials have a lot more landing lag!

In a motion to bring balance to Chibi-Robo’s Down Air, we decided that we needed to lower knockback to match some of the other meteor smashes in the game. As a trade-off, and doubling as a reference to Zip Lash, we decided to make Chibi-Robo’s plug extend farther in some crucial attacks. We are still a little unsure, and so we’re still testing this change in particular, but for now his down air has some pretty amazing range. Check it out! 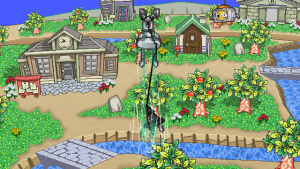 One of my favorite things about SSF2 is that it gives us a lot of room to experiment with things that normal Smash games don’t do – so we decided that we wanted to try out the idea of grab angling. Chibi-Robo has three angles for his grab: up, forward, and downward. When angled the grabs don’t go too sharply in either direction, but it should allow you to grab people in situations that other characters wouldn’t be able to. Watch it, though, because an angled grab won’t go as far horizontally as one that isn’t angled. 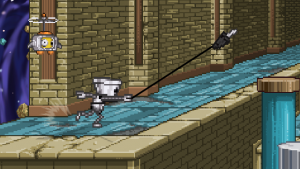 This might be good to catch people that are approaching me with an aerial.

One of the complaints we got the most about Chibi-Robo were his dead zones. If you don’t know what a dead zone is, basically they are areas where a character cannot quite reach in order to extend a combo or otherwise hit someone. For that reason we felt like Chibi-Robo needed an awesome aerial that felt extra satisfying to hit with that also covered those dead zones. Enter Chibi-Robo’s new Up Air!

We hope that this attack helps to bring things together. It’s an amazing finisher and a guaranteed followup from key attacks that just made it feel like Chibi-Robo was missing something. I love using it, and it reminds me a lot of Captain Falcon’s knee of justice. In fact, Chibi-Robo in Beta reminds me a lot of Captain Falcon in general. He has satisfying combos, and a really fun and blood-pumping speed to him that really separates the men from the boys.

Now Zelda, on the other hand, was one of our stronger characters in the last demo. Strong kill power on her lightning kicks, extremely low landing lag, a potent projectile, and a promising combo game made for a character with very few weaknesses. A couple easy key changes will makes her easier to deal with in Beta.

Her lightning kicks are slower, have more landing lag, decreased damage, and her Forward Air is now the stronger move of the two. The uses are basically the same, but they should be less effective and less safe on shield.

Zelda’s Din’s Fire was a move that had low risk but had very good rewards. It would explode even when missing and the explosion would linger, waiting for someone to run into it. Now in Beta her Din’s Fire will only explode when detonated on top of an opponent – but when it does hit, it shocks the opponent multiple times and then explodes for extra damage! If you’re gonna go for a Din’s Fire, make sure to keep your space, though, because it leaves you wide open for a counter attack if you’re too close and you miss.

A little different, but still not something you’d want to be caught by.

We also decided that Farore’s Wind should be slowed down so that it is more punishable when recovering, but of course we have to compensate for this! The trade-off for this nerf is that Zelda’s up special now has more uses offensively. The first hit sends the opponent upwards, and at the right percentages will combo into the last hit, which sends opponents flying forward. If you are hit at the beginning, the best way to avoid the last hit is to hold your directional button away from Zelda. If you anticipate that Zelda will throw it out before she actually uses it, you can shield either hit and Zelda will be left wide open. Don’t be fooled by this move’s shortcomings; if it catches you off guard it will deal a decent amount of damage and maybe even KO you! It’s also really fun to use close to stage boundaries for flashy, yet impractical, suicide combos.

There are some small changes as well, such as jab – it now stuns the opponent on the last hit allowing for combos if you are fast enough. Some attacks that are normally impossible to combo into can be linked in this way. The new Down Tilt works similarly, except you can use it out of a dash – space it well though, because if you hit the foot instead of Zelda’s leg, it instead becomes a very powerful downward lightning kick.

This jab combo in particular is useful, as it can continue into tons of other attacks.

Fox was also on the stronger side last demo, but we want to keep him in the spirit of how he was originally designed. For that reason, we have included a couple of smaller changes to make sure that technical skill prevails. The first being his Up Throw, which used to send you only upwards no matter which direction you held. Now we have given the ability for opponents to influence their direction to avoid guaranteed combos. The second change is to his Back Air. Opponents hit later on in the attack will now take less knockback and damage. It keeps Fox fast and fun without having the things that make him frustrating in some matches in older updates.

There are multiple other smaller changes based on community feedback. Here’s some of the more important ones.

Don’t expect this to be it, though. A huge part of balance is playtesting and learning how to use (and possibly abuse) the new tools we’ve given to the cast, so we have tons more changes to come. There have already been over 3300 updates to SSF2 Beta since it was first announced, and the number is growing every day. We’re excited for you to try everything out!

Unfortunately, all good things must come to an end.  This ends this week’s blog.  Thank you all for reading, and for staying with us for so long!  I do have one last thing for you as a parting gift, and that is your first video preview of SSF2 Beta since Smash Con – check it out below, it’s a match where I show off the new Chibi-Robo updates and take care of TSON’s Zelda:

Alright! That’s all I have – but I want you guys to definitely stay tuned for next week’s blog; we are going to show off something I’m sure everyone wants to hear.