After our little… mishap, I thought I should go into more detail on in a Bonus SSF2 Beta Dev Blog this week now that we’ve taken care of… the issue. Just a reminder, we take leaks extremely seriously – so rest assured that there will ALWAYS be repercus– well, anyway, Sandbag – let’s talk about Sandbag!

I’m not here to tell you that Sandbag’s reveal was a joke.
On the contrary actually – the actual joke is that we knew you would think it was a joke.
And you were right.
But you were SO WRONG! 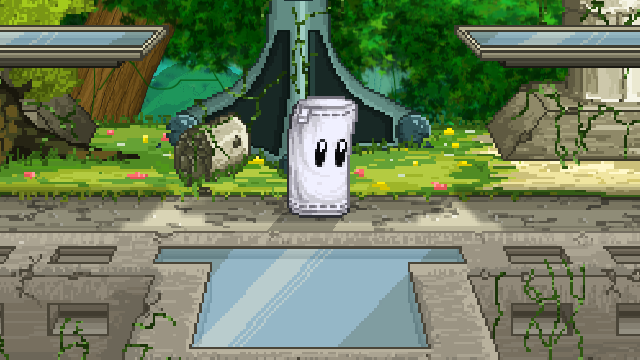 Let me explain: Sandbag is real… he was designed as the ultimate joke character. He should be considered as an extra bonus – not as a member of the main cast. Sandbag is an unlockable character in SSF2 Beta and will be the same in SSF2’s full release. His unlock method is extremely different from normal unlock conditions to further drive home the idea of being a plus-one to the cast. I won’t go into more detail on this condition than Cleodbot did – it’s a surprise!

Cleodbot has uploaded the contents of his solid-state storage to Sandbag, meaning that Sandbag now has intel on the Dev Team. So, we did a quick edit to his source file and now he can’t speak. Not a big deal. He also seems to have retained not only Cleodbot’s memory, but also memories from Sandbag – who knew – so basically he’s just really mad and has no way to express it in words. So mad, actually, that one of his costumes turns him a deep, bloodshot red. He is basically a physical embodiment of unbelievable rage. His only way to express it is to rid you of your stocks. 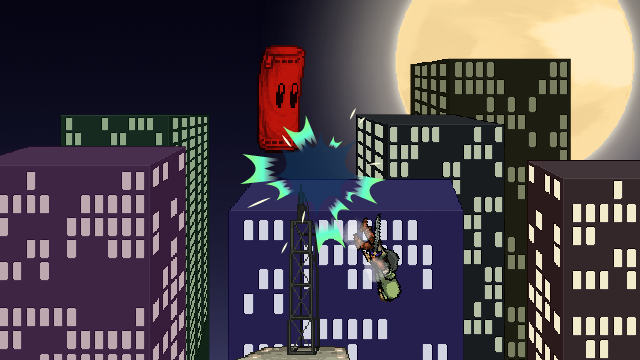 You’d be this mad too if I beat you up several times daily for almost a decade.
Sandbag’s moveset is a unique style compared to the rest of SSF2 and actually consists of only three frames – so it was a true test and trial of what our tools are capable of. After all, Sandbag doesn’t have any limbs or weapons and thus is super constrained in how he can move and attack. Nothing but these three frames were used to make over 70 unique animations, which I think is pretty impressive.

In gameplay, though, this poses a fatal flaw – Sandbag has no arms or tools to grab the ledge with! Somehow, holding onto opponents and items is no problem, but catching the ledge is impossible. Thus, recovering with Sandbag is extra difficult. His up special makes things even harder… if his hands are empty, Sandbag actually plucks a Bob-omb and tosses it above his head in a small arc. What goes up must come down, though; the bomb returns to a quivering Sandbag and blows him purely upwards, dealing tons of damage to him and anyone nearby! Take extra precaution… if anyone gets caught by the Bob-omb before it makes its way back, both parties will take extra damage and knockback, which could lead to your untimely demise. Wouldn’t that be a shame… 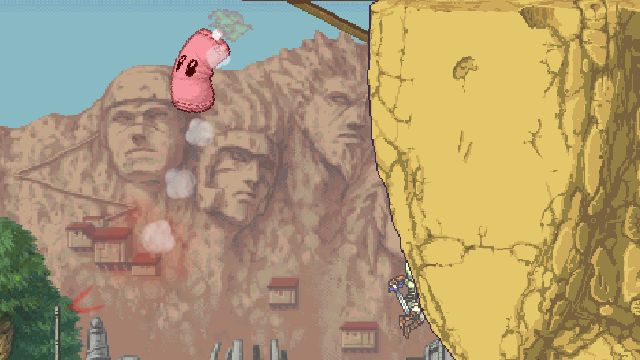 You also can only influence your direction backwards. Face away from the ledge if you’re recovering!

Sandbag’s other movement options are super unique too. Remember 2015’s APEX announcement video? (If not, click here.) At the end, Bomberman chased down a hopping Sandbag and sent him flying with a bat smash. If you’re really paying attention, you’ll notice that Sandbag got a little revenge at the end of his own announcement trailer, but pay attention to that exact hopping animation that Sandbag uses here, because we’ve recreated it for Sandbag’s in-game walk and run. The physics are unique to Sandbag, initially neither gives him any speed, but then he takes a huge leap forward… then completely stops when he lands. Rinse, repeat.

Here’s the thing, though. In Super Smash Flash 2, you can taunt out of the run animation. Sandbag’s side taunt is an extremely short ‘squish’ animation that kind of looks like he’s landing on the ground. Combine this with his wonky physics and you have some unbelievably weird and hard-to-understand movement options to use on your foes!

What in the world?!

You might say, “Well… that sounds like a trash character!” And to that I’d reply, “Yeah… So far. The rest of Sandbag’s moveset is not such a sob story. Take jab for example.”

Woah - that’s got some astonishing power for a jab!
That’s right – Sandbag has a one-hit jab, sort of like Ganondorf. Ganondorf could only dream of such power, though. This attack KO’s light characters at impressively low percentages and is very possible to combo into.

With such a weird walking and running animation, some players may want to stay away from grounded attacks except when extending combos, though, which is the way I personally play Sandbag. Good thing Sandbag has some of the most potent aerial attacks out of the entirety of SSF2’s cast! 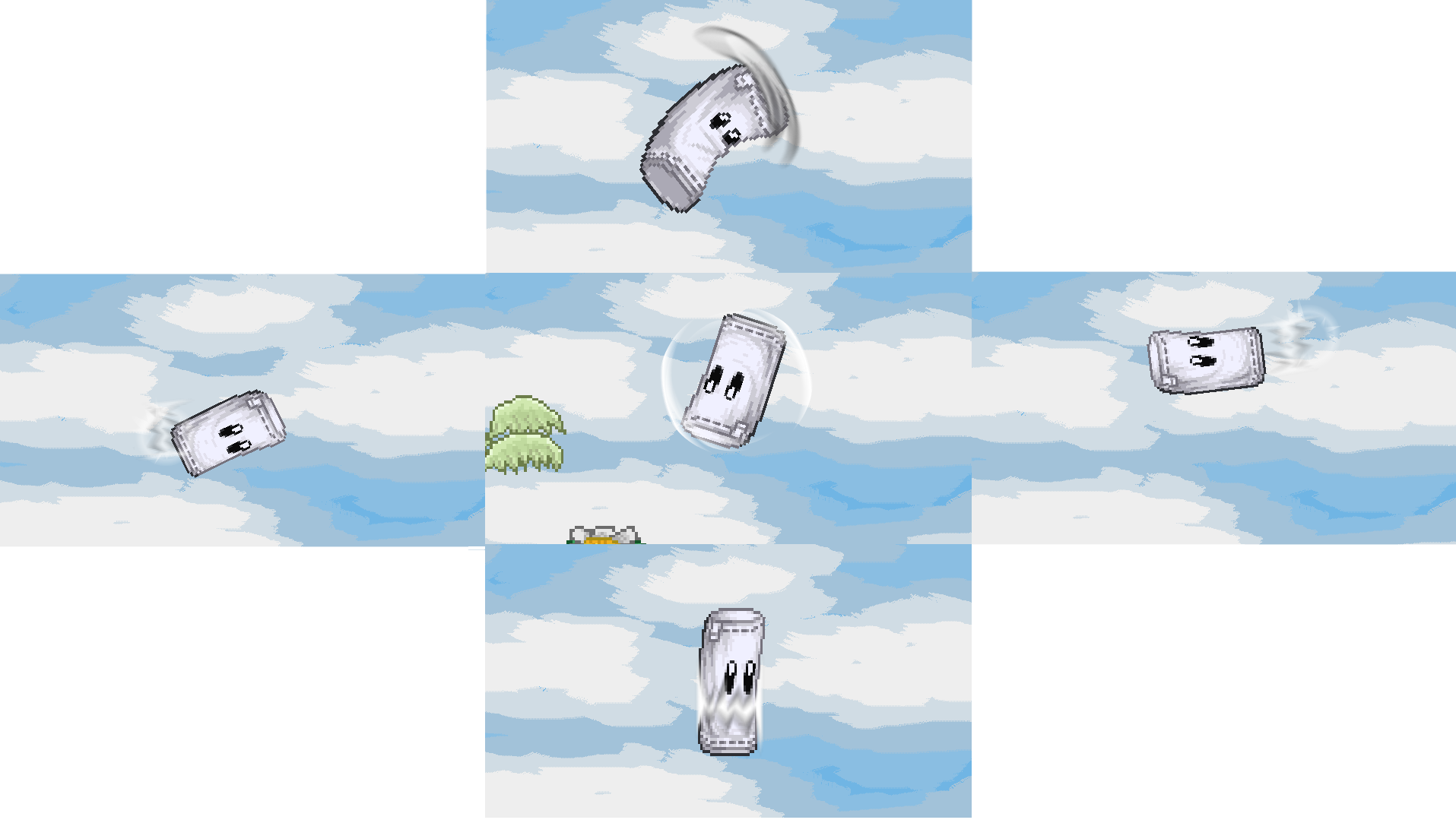 We’ve made sure to trickle in other Smash references and attacks that only a boneless, stretchy blob full of sand and items can perform, as well.

Is… is that Fox’s forward smash from Smash 64?

Only a true contortionist can pull this off.

And for those of us that play with items on, Sandbag’s final smash is the ‘Revenge’ he’s been waiting for. He sucks up the character nearest to him, and then blasts off like a rocket towards the Home Run Contest Arena. When he lands… well – you saw the video, but you missed one thing. Ingame, Sandbag actually smashes the opponent so hard that it cracks the distance counter, leaving it dangling around in shame. 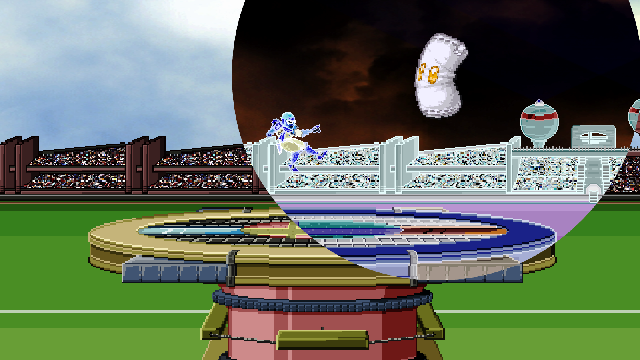 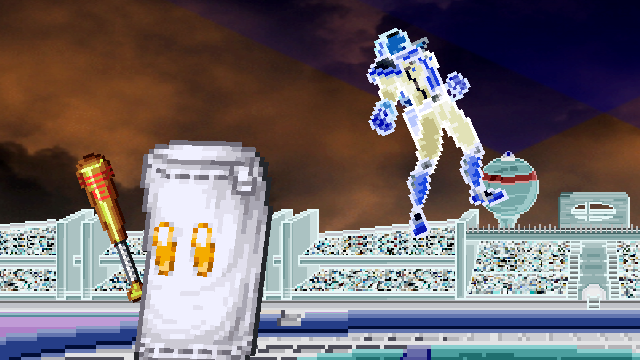 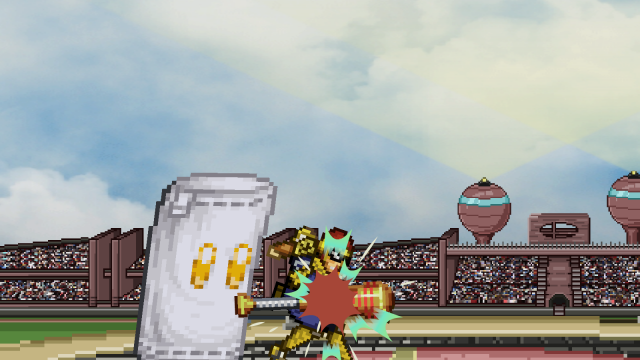 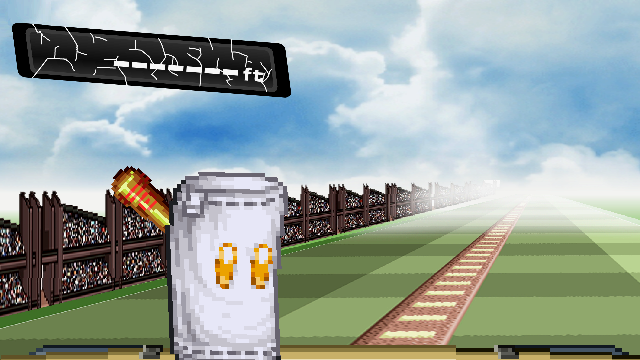