Hello, my name is Starkiller, and I’m a coder/balancer for SSF2!  This week I’m here to present to you some of the design and balance concepts of some of the new characters joining the roster in the SSF2 Beta.  This is Part One, featuring three veterans from past Smash games:  Luigi, Mr. Game & Watch, and Bowser. 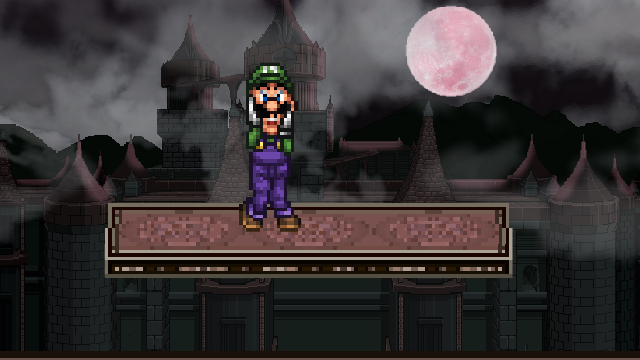 Luigi is excited to be here.

Luigi is one character from the Super Smash Brothers series that plays quite different no matter which game you play, but he does have core gameplay elements across the games.  We’ve done our best to give him the design that his later forms have had, while giving him ways to keep up with the fast pace of SSF2.

A staple of his gameplay, Luigi can perform more than one aerial in a short hop. This gives him a way to put pressure on shielding opponents, or combo his aerials together in a single jump.  You’ll recognize each of his aerials from the console games.

They all work! Use two that suit the moment!

As you may have noticed, Luigi sure can slide!  Another classic trait, Luigi has the lowest traction of all of the characters in SSF2.  You can combine this with dash canceling for an incredible movement and approach option.  Be careful though, if you make a mistake, Luigi will skid longer than any other character.

You never know when he'll come for you.

Another classic feature of Luigi is his long recovery.   Luigi can use his midair jump, Luigi Cyclone (down special), Green Missile (side special), and Super Jump Punch (up special) to recover.  With all of this, he can even go under Final Destination!

To compensate for this, Luigi dies more easily off of the top of the stage compared to other characters.  With a low fall speed and slightly below average weight, he will be sent to the stars at lower percents than other characters.

The rest of his moveset is straight out of the main Smash games.  His Fireball is green and flies horizontally, the Green Missile has a chance of being a Misfire, and his Super Jump Punch has a sweetspot at the start with incredible knockback.  One of the moves that has changed from game to game is his down special, the Luigi Cyclone.  Here it can only hit a maximum of two times, but it is incredibly useful for recovering or reaching an opponent that has been sent flying.

Nair is still good for combos too! 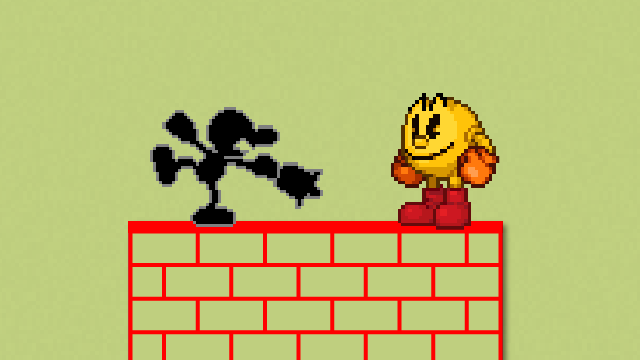 For whom the bell tolls.

Mr. Game & Watch’s moveset has undergone some minor changes over the years.  We’ve aimed to take features of his from all of the Smash games he has been in, from his up air having a windbox, to his neutral air parachute. 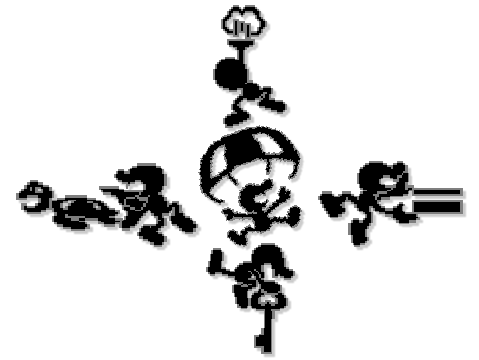 Mr. Game & Watch has an aerial for every situation.

Mr. Game & Watch’s up air is a good combo move, and it has enough vertical knockback to be good at killing too!  His forward air hurts a lot, you will want to use this move to knock your opponents into the blastzones.  His down air is a meteor that also sends him hurtling downward, you can catch your opponent offstage and end their stock or use this onstage for combo purposes.  Back air is a multi-hitting move with great range, it won’t kill but it can lead into some good followups.  Finally, his neutral air is the one from Melee, kind of slow but this move packs a punch.

For his specials, you’ll see the familiar set that he has had in all of the Smash games.  Chef, Judgement, Fire, and Oil Panic all reprise their roles as his neutral, side, up, and down special respectively. 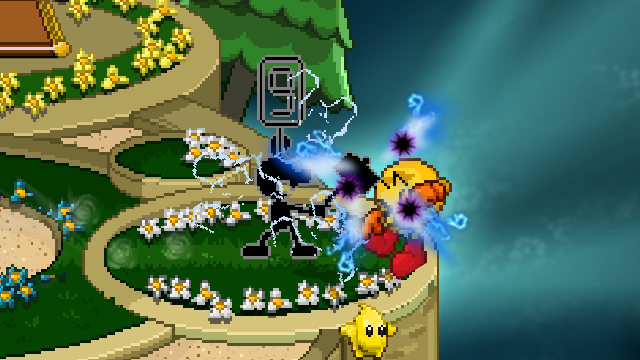 All of his other grounded moves also come from the main games.  If you’ve played Mr. Game & Watch in the past, you’ll have no problem adjusting to him in SSF2. 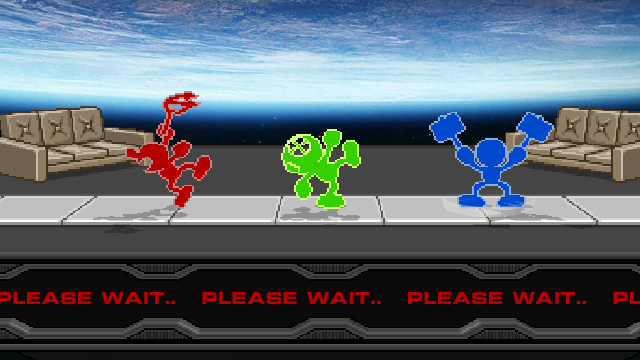 Smashes and colours check out. Ready to go!

On a more balance related note, Mr. Game & Watch’s throws are very similar, which is meant to confuse players that get grabbed.  His forward throw always takes you from behind him to in front, but his other throws are a lot more ambiguous.  Fortunately, his throws are not so powerful that their similarities make them impossible to deal with.  Just remember to prepare to tech his down throw, otherwise you’ll be caught with a nasty punish. 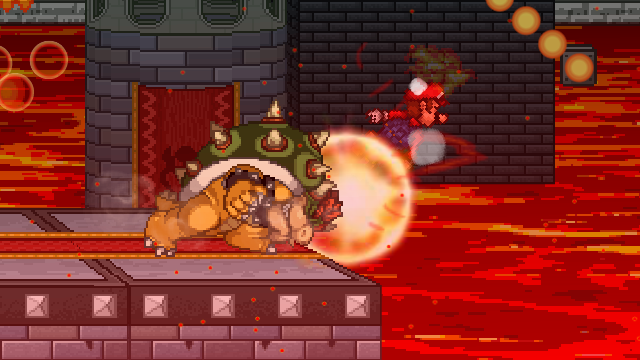 The King is back.

Another heavyweight joins the SSF2 roster!  Bowser has not had the best life in Super Smash Brothers, but in SSF2 we aim to keep the King of the Koopas lean and mean! 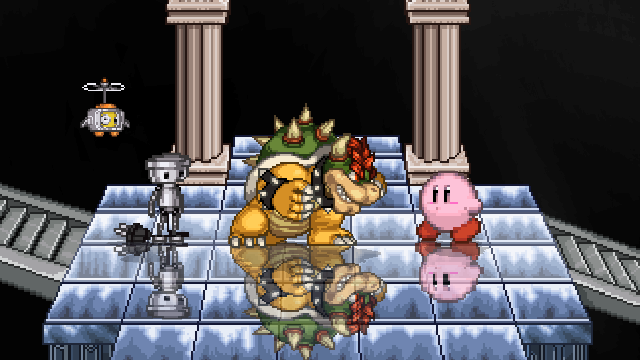 Bowser’s size makes him a big target for combos, and his weight makes him a bit of a punching bag.  Bowser also needs to play around his lack of speed, which he makes up for in kill power and range.  For instance, you’ll find that his forward air will be a Bowser’s best friend in Beta. It’s a long, flowing attack, and it has a special sweetspot once his hand reaches over his chest that’ll really hurt.

Bowser’s aerial mobility also isn’t the greatest, but we’ve given him a special height to his full hop.  While it might not be that high, it is high enough to barely land on Battlefield’s lower platforms.  You can use this to your advantage by edgecanceling his aerials, allowing you to use his otherwise slow aerials much more safely.  You don’t always need to edgecancel to get unique followups either.

Bowser has no shortage of kill moves, but he does have some moves that are good for combos.  His down air and up tilt have been sped up so that he has combo potential, and even his neutral air has the ability to set up a string.  If you aren’t too busy laying a smackdown on your opponent, these moves can chain into other moves for extra damage.

Looks like Marth has some competition for best grab combos.

Due to Bowser’s size, slow speed, and very long jumpsquat, it can be hard for him to get out of pressure (especially in shield).  His up special, Whirling Fortress, is just the kind of move he needs!  It’s fast, hits all around him, and he can move during it to retreat to safety.

Want to go on the offense? Bowser’s revamped Koopa Klaw marries the best of Melee and Brawl with a little SSF2 twist. Its slash has tons of range, great for reaching in and swiping up an opponent to start a combo. But what if they’re up close? Bowser’s actual hand during this attack can grab foes, turning the slash into a deadly body slam.

Every attack with Bowser is meant to be a commitment, but oh-so satisfying to land.  His moves are extremely powerful, but if you keep using laggy attacks over and over, you’re going to have a bad time.

I’ll be back next week for the rest of the newcomers to SSF2 Beta, but in the meantime, I’ll leave you with this video of two matches of Bowser versus Luigi!